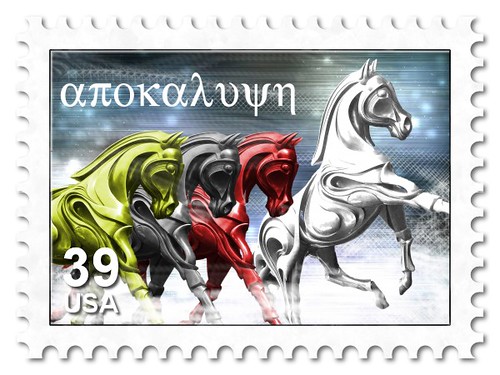 Todd’s Note: This article was previously posted on another site that is not longer active.  Luckily I had a copy of the article on my hard drive.  I hate to think about the articles that I didn’t archive.  Oh well.

Indeed, the Lord GOD does nothing without revealing His counsel to His servants the prophets.   Amos 3:7 (HCSB)

My journey into preparedness started in a spiritual way, but I never equate(d) TEOTWAWKI with “THE END” as in the Book of Revelations in the Bible. I just have a feeling that before “THE END,” that things are going to get pretty bad, thus the need to be prepared.

But I do believe that Christians should be aware of the signs and the times and have an idea of what could come in regards to End Times prophecy.  I say have an idea, because there are so many views, ideas, and theories out there.  If you have spent your time in one denomination, you probably are only familiar with your denomination’s or pastor’s view.  But throughout history, there have been many interpretations of the Book of Revelations.  The problem is that some people won’t accept that there are different interpretations and holding to the fact that their view could be wrong, well those are fighting words!

Personally, I don’t hold to one interpretation.  I rather know the major interpretations and stay vigilant, keeping one hand on the pulse of what is happening in the world and the other in the Bible; praying and reading and looking eagerly to the Second Coming.

One resource that I have found very valuable is the book Revelation: Four Views by Steve Gregg. This book is a commentary on the Book of Revelation with a special twist.  The book gives a running commentary on Revelation with all four views at the same time.  Those who are familiar with the Parallel Bible will have an idea of what I mean.

Before Gregg gets into the meat of the commentary, he shares what the four major views are and elaborates on them.  It is important to know that there are variations to each view, but they are all based on these four major views.

1. Historicist – God revealed the entire church age in advance through symbolic visions of the apocalypse.  One thing that Historicist proponents hold to is that this view can point to certain historical events to prove its reliability.  One story that Gregg writes about involves Robert Fleming and King William of Orange in 1690.  King William asked Fleming when the temporal power of the papacy in Europe would fall.  Fleming published a book called “Apocalyptic Key” in 1701.  In the book, Fleming predicted that judgment would fall in 1794 and expire in 1848.    Those that hold to the view point out that the French Revolution’s Reign of Terror started in 1794 and the pope was temporarily driven out of Rome in 1848.

In this view, the pope is the anti-Christ.  It is important to know that this is the view of many of the reformers.  So, it is understandable that they would hold to this view of the Roman Catholic Pope.  It should also be mentioned that many proponents of the Historicist view hold to the view that all the other views were created or made up by the Catholic church to counteract the view that the pope is the anti-Christ.

A point of weakness to the Historicist view is that there isn’t complete agreement on historical events as they relate to the symbols and visions of Revelation.

2. Preterism – Prophecies were fulfilled in the early church (70 AD), but was a prophecy to those who were living at that time.  In this view, the Book of Revelation is similar to any other prophetic book in the Old Testament, like Daniel.  The proponents of this view point out that the writings of Josephus regarding the Fall of Jerusalem and the visions of the book of Revelation seem to be in line with each other.

The weakness here is that every generation tends to interpret Revelation within their own time.

4. Spiritual – This view is known by many other names.  In the Spiritual view, there is no single fulfillment; only principles and recurrent themes: good vs. evil, God vs. Satan, etc…  Proponents believe that the book is edifying to every believer in every generation.

The weakness to this view is that Revelation claims to be predicting the future.

Again, your tradition might not allow you (a little normalcy bias there?) to see any other view of the Book of Revelation.  But I think it is a great idea to know what all the views are.  For more information, please get a copy of the book, it is definitely worth it.