Home
Preppers
The Wild Plum – The Wild Edible You Want to Know When the SHTF!
Tweet Pin It

One staple wild edible every smart prepper should be privy to

That’s the response if the question is “What % RDA of Vitamin A is in a handful of wild plums?”

If that fact alone doesn’t dilate your pupils and keep you engaged to learn more about the widely overseen abundance of wild bumper crops that’s all around us, I don’t know what would.

Sure, wild plums are not as sexy to talk about as that new gaudy “Zombie Killer” throwing ax that comes in 15 colors, I’ll give you that.

But this is the point that separates men from the boys, a smart prepper clear on his priorities sincerely looking to prepare for whatever the future holds and a tire-kicking “prepper” (with air quotes) who’s all about being cool.

Now that we got that out of the way (and probably offended a few people in the process) let’s get down to business.

Am I cherry-picking (pun intended) pieces of information for effect?

I’ve heard this one before when I talk about wild edibles…comments like, “Sure, but you can find that kind of sensationalistic bit of info and run with it to get people’s attention…”

So let’s see if I’m doing it here.

Head to head – wild plum vs. a “superfood”

Just for reference, let’s compare the wild plums to the wildly praised “superfood” – broccoli. BTW, I hate the term “superfood.” It means nothing and just leaves you guessing what’s in it that’s so super.

Let us see how the “superfood” fares against the simple wild plum in some of the most essential nutrients.

We’ve put together the tables below to compare the nutrients in 7 oz. of wild plums and the same amount of raw broccoli.

The numbers are based on the needs of 200-pound, 40-year-old, moderately active man.


Again, that’s not the main forte of wild plums if we’re talking potassium – it’s the Potassium to Sodium ratio.

In wild plums, the ratio is approximately 100 to 1 (milligrams) while the ratio in broccoli is 10:1.

We’re not making the case here that you can overdose on Sodium by eating broccoli – the point is that the ratio in wild plums is at the “sweet spot”, and you don’t have to worry about sodium – it’s as simple as that.

Why is this important?

Unless you stumble upon a field of pumpkins, sweet potatoes, and carrots or a tree that grows eggs and whole milk, sources of Vitamin A in a survival situation would be scarce.

Wild plums are among the few naturally-occurring foods that are this is rich in a vitamin that’s crucial for all of the below:

The body of evidence about just how important Vitamin A is for proper sleep has been growing ever since the 2005 National Health and Nutrition Examination Survey.

You don’t need to know the scientific nitty-gritty

If you are bored reading about the chemical mumbo-jumbo, let me tell you, it’s not a fizz writing about it either.

The takeaway from we said above shouldn’t be numbers – it should be the simple idea about the abundant Nature’s gift that is the Wild Plum.

Enough with the broccoli – we get it!

I know, I know…I probably overdid it with the broccoli thing – it was just to make a few points.

Now that we have the basics down let’s move and bite into the “meat” of this article – the actionable part – where the plum grows, how to spot it and discern it from toxic shrubs and whether it can be bad for you.

This is the part where we’ll lose some of you since, as the natural distribution map below shows, Prunus Americana don’t grow throughout the US.

Its natural habitat ranges from North Dakota and parts of Minnesota in the North down to parts of Alabama and Georgia in the South, and from parts of South Dakota, Nebraska Kansas and Oklahoma in the West to Virginia and Carolinas in the East.

Not as common as in the states above, it’s also “sprinkled” in some areas of Montana, Utah, Colorado, Arizona and even New Mexico (see the map below).

How the tree looks

The wild plum grows like a small tree or a high-shrub, and it reaches up to 15 feet in height. The crown of the tree is broad with thorny branches and rich white flowers when blooming.

It blooms in mid-spring and its growth is most active and fruitful in the late spring and through the summer. 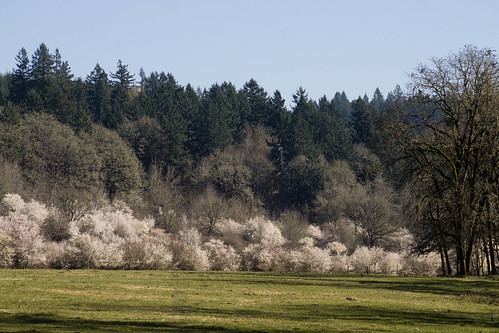 What the fruit looks like
We won’t be getting in all the species and sub-species here – they all belong to the same family and have similar nutritional value.  A ripe wild plum is about the size of a cherry, and the color can be anywhere from the bright yellow to dark purple.

One of the “features” that stands out is the waxy coating of dust-like yeast that covers the fruit. The white coating is similar to that of a domestic plum, and it serves a very specific purpose – it’s a protective layer of natural wax. It keeps the moisture in and protects the fruit from drying out.

When broken, the tough skin has what can be described as a crispy texture.

If you’ve ever tasted a wild plum, you’re not likely to mistake it for anything else.

The taste is distinctively tart and mouth-puckering, especially if it’s not fully ripe. As it ripens, it becomes sweeter and not as tart.

If I say that there’s a term “plum-bum”, you can probably anticipate what risks are involved with eating too much of it.

How much it too much?

It depends on your digestive system. What I did to come to my “plum-bum-red-line” is gather some and test my stomach in the safety of my home.

In my case, the red-line is about 15 ounces…anything more than that in one sitting is too much for my bowels.

Can it be toxic?

Wild plums are not toxic for people.

Whether it’s relevant to the reader I can’t know but me mentioned it just as well – while the dried or fresh leaves are not toxic, DRYING leaves are, especially for small animals.

When I say “drying”, I’m referring to the leaves of a branch that’s been broken off and is parching.

If you do get to a nice ripe bundle of wild plums before a murder of crow does, return the Nature’s favor by throwing the kernels around as you go. Out of the 10 you throw, one will take.

Little things like this do make a difference in the big picture.

This was the first part of the series of article about the wild bumper crops you should know about – in the next chapter we’ll like into the more exotic and, perhaps, more surprising “friend” we have out there – a Nature’s version of a multi-practice – the Cattail.

Until then, stay safe and smart